Diversity is what makes our world come alive and black color is beautiful. It’s an undeniable fact that Black women are insanely beautiful with some of the most stunningly captivating features. From Selita Ebanks to Rihanna, these are some of the most glorious black women in the industry. This is a tribute to these very talented and sensational black women in the world of cinema, fashion, music, sports and television who have taken the world by storm.

Let’s dive right into the list of these remarkably beautiful women.

‘The baby of the Jackson family of musicians’ and over the years ‘a multi-platinum selling artist’ – Janet Jackson has been a prominent personality in popular culture for over 30 years. The star is known for her innovative and sexually provocative music which is so powerful, even today. Her most popular singles include – “Nasty”, “That’s The Way Love Goes” and “Together Again” among her other works. The gorgeous singer has won many awards for her music including two Grammy Awards.

Everyone knows Gina Torres from her character as Jessica Pearson on ‘Suits’ but the stunning actress has been a part of various other TV shows and movies like Hercules: The Legendary Journeys, Xena: Warrior Princess, Cleopatra 2525, Firefly, The Shield, Westworld, and many others. She also starred in the feature film ‘I Think I Love My Wife’ opposite Chris Rock. She has won an ALMA Award for Outstanding Lead Actress in a Syndicated Drama Series.

This beauty with her exotic features started off her career in a short-lived sitcom called ‘True Colors’. She has starred in over 20 films of different genres, some of which include – ‘The Nutty Professor’, ‘The Matrix Reloaded’, ‘The Matrix Revolutions’ and also the ‘Madagascar’ series. She’s married to Will Smith, and they have two children – Willow and Jaden.

This ‘wonder woman’  has been ranked World No. 1 in singles by the ‘Women’s Tennis Associaton’ (WTA) on eight occasions from 2002-2017. Some of the commentators, sports writers, and even players regard her as the greatest tennis player of all time. She has won so many awards for her performance in the sport that it’s hard to even keep count. Besides Tennis, she has her own fund that aims to create equality through education and assists victims of senseless violence. The tennis star has struggled with body-shaming and cruel remarks about her body but she does not allow anything to break her and she only keeps climbing the ladder of success, further up. Also, she recently gave birth to a baby girl. Way to go, Serena!

The much-talented Solange Knowles is the younger sister of Beyonce. She expressed interest in music since an early age and was a temporary backup dancer for Destiny’s Child. Coming out of her sister’s shadow, she released her first studio album at 16 and has created a name for herself. The beautiful singer has won a Grammy Award for best R&B performance this year. She also took home her first trophy from the BET Awards this year.

The Academy-Award winning actress was named one of the 100 most influential people in the world on the annual ‘Time 100 list’ in 2016. Some of her most marvelous performances were seen in the Oscar nominated film ‘Hidden Figures’, the hit TV series ‘Empire’ and other films like ‘The Curious Case of Benjamin Button’ and ‘Person of Interest’. She was also voted as one of “The 10 Sexiest Women of 2001” by the readers of ‘Black Men’ magazine.

This ingenious actress is the only black woman to be nominated for three Academy Awards, winning one and she is the only black actress to have won the Triple Crown of Acting. She was also listed as one of the 100 most influential people in the world by Time Magazine in 2012 and 2017. Besides her many awards and accomplishments for her acting, she is also the ambassador of ‘Hunger Is’ which is a charity that aims at fighting childhood hunger.

The daughter of legendary boxing champion Muhammad Ali – Laila Ali is a former professional boxer (she has been in the sport from 1999 to 2007). Her father did not want her to pursue the sport due to its dangerous nature, but Laila was unstoppable. During her boxing career, she remained undefeated and has won a number of titles to her name including the Women’s Boxing Association’s Light Heavyweight title.

This gorgeousness from Dominican Republic is considered to be one of the most attractive black female celebrities as of 2017.  She is the current spokesmodel for Lancome. She’s also widely recognized for her work with Victoria’s Secret, Anne Sui, Alexander Wang and Jean Paul Gaultier among others.

At number 1 on the list is the Queen B herself – truly a woman who needs no introduction but she was voted as the hottest woman of the 21st century by GQ (among all the other accolades she has received). Besides her beautiful body and the whole desirability factor, she has come to be a pop-culture icon and the most powerful pop star in the music industry. She is a media mogul, a musician, a brand, a feminist and a mother – basically a “fantasy woman” with her art appealing to millions all around the globe.

So that was the list of 35 most beautiful black women in the world. Of course, there are so many more gorgeous black women out there, but then our list would’ve been endless. Do you have any favorites? If you do, please leave their names down in the comments section below. These powerful women are more than just “pretty faces”, they have faced endless challenges and struggles in a world where racism towards the black community is very real, even today (sadly). It’s time for society to widen its idea of “beauty” with these stunning women.

Thu Jul 25 , 2019
Who can forget that gypsy woman at the carnival who swore that she could tell you your future by looking at that glass ball or a bowl of water? The mystique that hung over and around these gypsies can be mesmerizing. Equally attractive and beautiful is the makeup and the […] 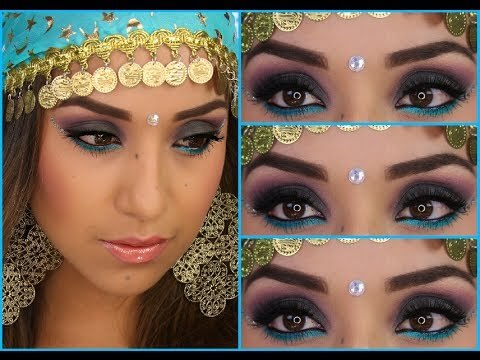