Panerai is one of the most prestigious Italian watch manufacturer brands, and it is known for its luxury products. During World War II, Italian Navy divers wore these timepieces on secret underwater missions to locate enemy submarines. Since the 1860s, these action-packed Italian luxury timepieces have been a part of history.

Since their introduction, Panerai watches have been successful in capturing the attention of their customers by surprising them with innovations year after year. Panerai creates its Panerai timepieces by combining its traditional artistry and technological advancements in the modern era. Panerai has created signature models based on its popular collections, particularly the Panerai Luminor and Panerai Radiomir collections.

Production of the Delicate Timepiece

To ensure that this Panerai dive watch is compatible with all stealth missions underwater, the dial was created using a patented radium-based phosphor. It allows the timepiece to be used on all stealth missions underwater and be compatible with all Panerai dive watches. In contrast, at the time of Radiomir production, the general public was unaware that they were manufacturing radioactive materials using the most active radioactive substance known to man. The manufacture of this Radiomir watch series, on the other hand, was extremely limited because the timepieces were not intended for sale to the general public.

The peak of the Panerai Luminor

The first Panerai Luminor watch was introduced in the 1950s, and it was quickly followed by the introduction of numerous other models. The Panerai Luminor 1950, which was first released in 1950, had an eight-day power reserve and used a tritium-based luminous substance on the dial and hands. The fate of the Panerai Luminor, on the other hand, had something very good in store for it. While filming on location in Rome in the 1990s, the actor Sylvester Stallone happened to notice the Panerai Luminor Submersible in a shop window and was immediately drawn to it by the imposing character of the military timepiece, which he felt was a perfect match for his on-screen persona. A strong friendship has developed between Sly and the brand as a result of the uninvited exposure he received.

Luminor Daylight Slytech was the name of a new Panerai Luminor model that debuted shortly after the film’s release, and it was inspired by both the film’s title and the actor’s nickname. The Richemont Group (then known as the Vendôme Group) acquired Officine Panerai in 1997, ushering in a new era for the company. The entire military production branch of the company was shut down under the new management structure. In the following year, Panerai unveiled its first collection of public timepieces. The Panerai fan club reacted enthusiastically to the company’s large, functional military watches, which were combined with pure Italian design to great effect. Panerai’s luxury is derived from the company’s history as well as the functionality of each feature.

During the next few years, the Officine Panerai had something completely different in mind for their products. In 2006, the brand’s long-standing association with the sea evolved into a more recreational association with water sports. Officine Panerai acquired and restored Eilean, a Bermudan ketch sailing boat built in Scotland in 1936, for the company’s collection. Three years of restoration were required to restore her to her former glory, and she is now a competitor in vintage yacht races all over the world. However, while the company’s headquarters remain in Italy, the majority of its manufacturing has been relocated to Switzerland. Angelo Bonati, CEO since 1997, sees no conflict in creating luxury timepieces with a deep Italian soul and past that are powered by a Swiss heart that beats to the beat of the world. Officine Panerai has maintained its course, remaining true to the quintessential with the iconic designs of its star models, the Panerai Radiomir and the Panerai Luminor, for the better part of the last two decades.

PAM00563, the Panerai Luminor Marina PAM00563, is a high-end Swiss-made timepiece with a beautiful design that was first introduced in the early 1990s. Because it was originally intended for military contractors, this was the first time it was made available to civilians on the open market. It is currently designed in a contemporary manner, with a cushion case that incorporates strong lines and new curves to ensure long-term durability. It has a 44mm case with a transparent sapphire crystal back, and the dial is white with Arabic numerals and luminous dots on the hour and minute hands. The Panerai 44mm watches are powered by the Panerai caliber P.5000 hand-wind movement, which operates at a rate of 21600A/h. It is made up of 127 components, including 21 jewels, and has a power reserve of 192 hours. It is available in two sizes. It has a leather bandwidth of 22.9mm, which provides the best possible comfort and strength. With this watch, you can go scuba diving because it is water-resistant up to 300 meters.

An extremely high-end sports watch for men, the Panerai Luminor 1950 PAM00233, was introduced in 2006 and boasts an array of high-end features and functions. It is a member of the Luminor 1950 family and is commonly referred to as the Luminor 1950 8 Days GMT Accaiao. In addition to the stainless steel construction, the front glass is made of sapphire with a lug diameter of 24 millimeters, and the case measures 44 millimeters in diameter. It also has a rubber strap to keep it in place. The Panerai P.2002 mechanical movement, which is a hand-wound, contains 247 components and 21 jewels. This movement consists of three high-speed spring barrels that beat at a frequency of 28,000 beats per hour and have a power reserve of 192 hours. Hours, minutes, small seconds, date GMT, 24-hour indicator, seconds reset, and power preservation are all included in the Panerai GMT functions list. This timepiece is water-resistant to a depth of 100 meters.

An opulent timepiece with an elegant appearance, the Panerai Luminor 1950 PAM01321 is designed specifically for men. It is the most recent model in the Luminor series, having been released in 2019. The case back of this Panerai Luminor GMT watch measures 44 millimeters in diameter and is made of brushed steel with rounded curved edges. In addition, it has a black dial with luminous Arabic numerals and markers on the hour and minute hands.

In addition, the hands that indicate the hours and minutes are illuminated by a luminous inlay. The seconds sub-dial is located at the 9 o’clock position and is indicated by a blue Panerai hour hand. On these Panerai 44mm timepieces, the date window is located at the 3 o’clock position on the dial. The three-day power-saving indicator is located at 5 o’clock. It is powered by a P.9013 automatic movement with 231 components and 31 jewels, which is hand-wound. In addition, it has a 300m water resistance rating.

The Panerai Luminor Due PAM00944 made its debut at the SIHH 2018 exhibition. This Panerai Luminor watch model retains the original, yet elegant, design of the previous model.

The stainless steel case has a 45-millimeter diameter and is water-resistant to 50 meters. Because of the smaller dimensions on the case back, the watch has a more comfortable fit on the wrist when worn. Also included are highly polished surfaces, which enhance the appearance of the watch while making it more susceptible to scratches. In the Panerai, an automatic movement of caliber P.4002 is used, which has an off-center micro-rotor that rotates in all directions. Furthermore, it is equipped with a 3-day power reserve, which is stored in two spring barrels. In addition, the caliber includes additional useful functions such as the date, Panerai GMT, and others. The analog display has a combination of indexes and stick hands.

Officine Panerai, with its distinctive designs and enthralling history, is without a doubt one of the most recognizable and appreciated sports watch brands in the world. All of the Officine Panerai’s models, in their entirety, combine advanced functions with an elegant appearance, making them a must-have for anyone’s wishlist. Because of this, they have successfully brought ideas to life through their exquisite range of collections, which is in keeping with their mission statement.

Slay and Style with these Hublot Jewelry Watches

Wed Aug 4 , 2021
Jewelry symbolizes self-adornment and an indication of social status during the earliest times. It is the first form of creative self-expression worn by Egyptians that aims to stand out from others. Some ancient people believed that jewels have special abilities and medical benefits, but today these decorative pieces made an […] 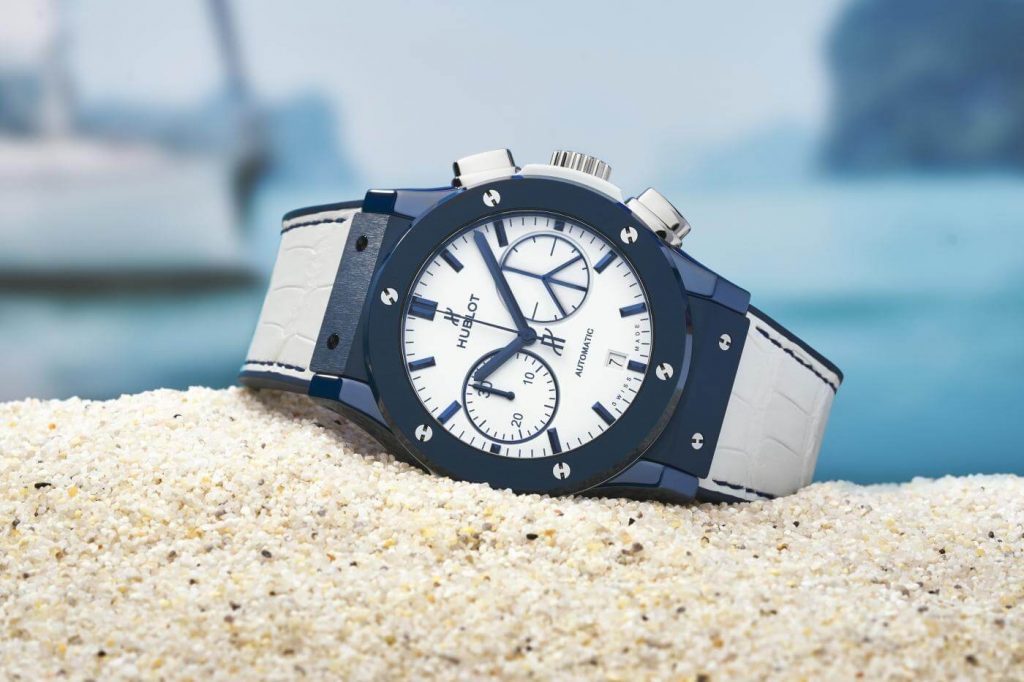